Corey Jenkins is the Airport Manager as of August 4th, 2021.  Corey has a degree in Aviation Management from Louisiana Tech University and is also a Private Pilot.  Corey has a broad background with management experience in Information Technology, Helicopter Line Services, Airport Operations and as an Entrepreneur.  As a member of AAAE he has also received his ACE certification.

Rick Lee is the Airport Maintenance and Operations Technician and has served in this capacity since October 2020. Rick has a broad skill set that includes vehicle/equipment maintenance, and specialized airport technical knowledge. Rick’s primary responsibilities include maintaining landside and airside facilities and airport equipment. Rick comes to the Carson City Airport from the Reno-Tahoe International Airport where he received specialized training in airport snow removal and airfield maintenance. Rick is a Carson City native and retired from the Nevada National Guard.

Fixed Base Operator Representative Board Member

Paul Hamilton was appointed to the Carson City Airport Authority in April 2019. In 1978, Mr. Hamilton was issued a US Patent # 416406 for a variable camber inflatable hang gliding wing he developed, built and flew in college. Mr. Hamilton graduated from the University of Nevada, Reno with a Bachelor of Science in Mechanical Engineering specializing in Aeronautics. Mr. Hamilton went on to work as an Engineer in Design, Analysis, and Flight Testing for the Lear Fan business turboprop/jet. Mr. Hamilton holds the Federal Aviation Administration’s (FAA) highest ratings possible for Weight-Shift Control aircraft with a Private Pilot rating, a Certified Flight Instructor (CFI) rating, and is an FAA Designated Pilot Examiner (DPE).  Mr. Hamilton wrote the FAA “Weight-Shift Control Flying Handbook” 8083-5 which is used as the basis for all weight-shift training throughout the world. Mr. Hamilton has accumulated more than 2,000 flying hours and is a Master Rated Hang Glider Pilot and Advanced Rated Paraglider Pilot with the USHPA, United States Hang Gliding and Paragliding Association.

​Tim Puliz is married to Vick Puliz. They have a blended family of 7 children and 9 grandchildren. Tim is a retired independent family businessman serving both northern and southern Nevada for 41 years. Tim guided a family of companies that include: Puliz Moving & Storage, Puliz Records Management Service, and ATAAP Co., LLC, a Real Estate Development company. Tim has volunteered his time and talents to a variety of organizations including Sparks YMCA Board of Directors, Wells Fargo Nevada Community Advisory Board, Experimental Aircraft Association (EAA) Young Eagles program, Angel Flight West, and a member of the Carson City Sheriff’s Aero Squadron. Tim has participated in dozens of Rotary International projects worldwide. Tim is a private pilot and bases his Twin Comanche in the Jet Ranch Hangers on the Carson City Airport. Tim has accumulated 1,800 hours of flight time and has a multi-engine and instrument rating.

KARL HUTTER – CLICK BOND PRESIDENT AND CHIEF EXECUTIVE OFFICER In 2015, Karl Hutter became the President and Chief Executive Officer of Click Bond, Inc.  Prior to becoming CEO, from 2013-2015, Karl served as the Treasurer, Chief Operating Officer, and Chief Financial Officer of the company.  From 2008 – 2013, Karl served as Vice President of Sales and Marketing, where he focused on building Click Bond’s reputation as a solutions partner, enabling Click Bond’s technology on the F-35 program and numerous other key platforms across the commercial and defense aerospace sector.

Prior to leading the sales department, Karl spearheaded the company’s business development and applications engineering efforts across the Asia Pacific region, creating a strong foundation for global growth, particularly in Japan, China, and Australia.  Karl holds Bachelor of Science degrees in Systems Engineering from the University of Pennsylvania School of Engineering and Applied Science and in Entrepreneurial Management and Operations management from the Wharton School. 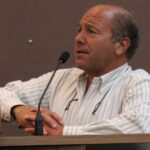 Michael Golden is the owner and operator of Mountain West Aviation. Mr. Golden assumed duties as Board Chair in July 2019. He began his tenure on the Airport Authority Board in 2018 as a Fixed Base Operator representative. Mr. Golden is a licensed private pilot and is an owner of fixed base operations in South Lake Tahoe Airport and Elko Regional Airport.

Jon Rogers has served on the Carson City Airport Authority Board since 2018 as a manufacturer representative. Mr. Rogers has a long career in manufacturing which includes owning his own company, Lock-N-Lift, the inventor and world’s foremost expert for dovetail style steel plate lifting tools. Mr. Rogers was appointed Treasurer of the Carson City Airport Authority in July 2019. Mr. Rogers is active in the service of the community serving on the Brewery Arts Board of Directors.

Stan Jones is a member of the Carson City Board of Supervisors and the liaison from that board serving on Carson City’s Airport Authority. Appointed in 2020, he became a member of the authority in early 2021 after assuming office as a supervisor. Successful, longtime business owner. Distinguished Military Career, reaching the rank of Brigadier General. Proven record of community service as a volunteer and service on numerous boards. From 2001 to the present Stan and his wife owner and operator of The Purple Avocado, a Carson City gift shop.

Harlow was appointed to the Carson City Airport Authority in October 2021 and has served two previous terms on the Board.  He moved to Carson City with his family in 1959, attended school locally, and graduated from the University of Nevada at Reno with a Bachelor of Science Degree in Business Administration.  Harlow also participated in ROTC at UNR and served 23 years on active duty as an Army Aviator.  After retirement in 1998, he spent the next 22 years as a corporate pilot, flying several different models of business jets.  Harlow makes his home in Carson City with his wife Cindy and their three grown children and nine grand children.

Armstrong Consultants has served as the Carson City Airport Authority’s consulting engineering firm since January 2019. Armstrong Consultants has over 45 years of airport-exclusive knowledge of FAA and NDOT processes, with 29 of those years servicing Nevada communities. Armstrong’s vision is to be the leading, most respected aviation planning, engineering, and construction administration firm in Nevada. Armstrong’s primary objective is to provide solutions by collaborating with airport sponsors to develop successful project outcomes. Our staff of nearly 50 people, is comprised of airport planners, engineers, resident inspectors, and support personnel who have dedicated their careers to improving airports. Established in 1973, and serving the airport community exclusively for the last 30 years, our firm has completed over 1,200 projects at more than 130 different airports.

The Carson City Airport was initially established in 1928 on 76 acres of land provided to Carson City by 3 prominent local families. The Airport expanded significantly in the 1940s and 50s to allow for an east-west runway taking advantage of the prevailing westerly Sierra Nevada winds. This acreage comprises the approximate footprint of the main runway. Many areas were dirt and services on the field were limited.  In the 1970’s, Carson City designated land north of the main runway as the Carson City Industrial Airport and offered parcels for lease in order to attract clean, high quality manufacturers. These parcels were eventually sold to the tenants, and the area continues to evolve as a thriving manufacturing / industrial hub.